Here is the new report to inform you of what has been going on PrestaShop translation project on Crowdin this August 2015.

All the figures and statistics are (still) based on the 1.6.1.0 project. Figures were extracted on the 27th of August, so it’s not the full month, but the main trends are here.

As a reminder, we’ve recently changed the workflow on Crowdin, so you should now translate in the “next-version” file in priority. Read all about it here.

A lot of you are working everyday on Crowdin to have PrestaShop available in many languages, and we can’t thank you enough for your dedication! Here are the most active translators and proofreaders for the month of August.

…and almost fully translated (and validated) in the following 7 languages:

In comparison with the previous month, these languages had the best progress in August: 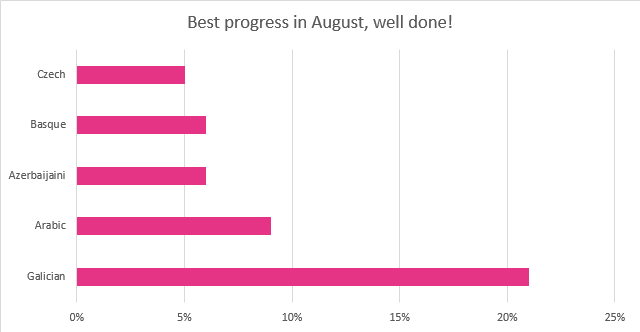 We also have new active languages: thanks to translators who joined us to translate in Galician, Spanish (Colombia, Peru), Malay, and welcome to the team!

As you might know, a translated string will not be available in PrestaShop as long as it is not validated. For this reason, it’s important we should keep a good level of validated strings vs. translated string, to make sure everyone benefits from the latest translations!