Here is the new report to inform you of what has been going on PrestaShop translation project on Crowdin this June 2015.

All the figures and statistics are still based on the 1.6.0.14 project, which was the last stable version released in June. The next edition will be all about the new 1.6.1.0, so if your language hasn’t made it to this edition of the Translation Report, then it’s your time to shine, get that percentage up!

A lot of you are working everyday on Crowdin to have PrestaShop available in many languages, and we can’t thank you enough for your dedication! Here are the most active translators and proofreaders for the month of June.

…and almost fully translated (and validated) in the following 7 languages:

The 1.6.0.14 version is still available for translation - now is the time to complete translations! We’ll let you know when we upload the newest dev version and consequently get rid of the 1.6.0.14 project on Crowdin.

In comparison with the previous month, these languages had the best progress in June:

We also have new active languages: thanks to translators who joined us to translate in Bulgarian and Tamil, and welcome to the team!

As you might know, a translated string will not be available in PrestaShop as long as it is not validated. For this reason, it’s important we should keep a good level of validated strings vs. translated string, to make sure everyone benefits from the latest translations! 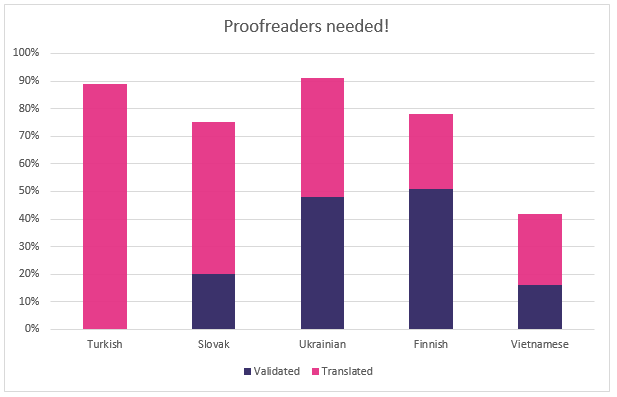 If you wish to help proofreading what has been translated, please contact me on Crowdin with the language you’d like to proofread.

We’ve added this new language at the request of NicoLux. It is based on the available German translation. The more, the merrier: If you want to help translating PrestaShop in Luxembourgish, join the project and don’t hesitate to get in touch with NicoLux! The focus is on the shop’s, PDF and emails content mainly.

Another language added to the project (what a month!). Thanks to Rinat Mirgazov and Gulnaz Valeeva who provided the translations: thanks to them, it is already at 25% of completion! Tatars of the world, join your our project to keep PrestaShop up-to-date in your language!

Koral has raised the flag regarding proofreading for the Polish translation project. It’s almost fully translated, we would just need the strings to be validated to have it fully available in the software. There’s not much to be validated, but it has to be done at some point. Speak up if you want to help!

95 contributors joined the project this month, for a total of 1,964 members at the end of June. Welcome to them! 72 members (including PrestaShop employees) were active on the project this month (+20%). A total of 51,058 words have been translated (that’s about 80% more than the previous month - wow!) and 28,131 validated, in 34 different languages - this is huge!

If you want to gather your fellow translators to work towards a better harmonization (let’s dream a bit), do let us know, we’ll include a word about it in the next monthly report.