Here is the new report to inform you of what has been going on PrestaShop translation project on Crowdin this July 2015.

All the figures and statistics are now based on the 1.6.1.0 project, released early June, which is the last stable version of PrestaShop. Even thought previous reports were still about the 1.6.0.14 version, the figures for this month are a comparison with the state of 1.6.1.0 in June (as the project was already available in Crowdin).

Before anything, you must be aware we’ve changing the workflow on Crowdin, to reflect our new semantic versioning scheme, and branch organization.

From now on, we still have two files, but the way it works is a bit different:

Today we have the ‘1.6.1.0’ file, as it’s the latest release. Remember, anything translated there will not be propagated to the main project, which is ‘next-version’.
Should you have any question regarding this, please don’t hesitate to comment or contact me.

Now, let’s get back to the congratulations for your contributions in July:

A lot of you are working everyday on Crowdin to have PrestaShop available in many languages, and we can’t thank you enough for your dedication! Here are the most active translators and proofreaders for the month of July.

…and almost fully translated (and validated) in the following 6 languages:

In comparison with the previous month, these languages had the best progress in July: 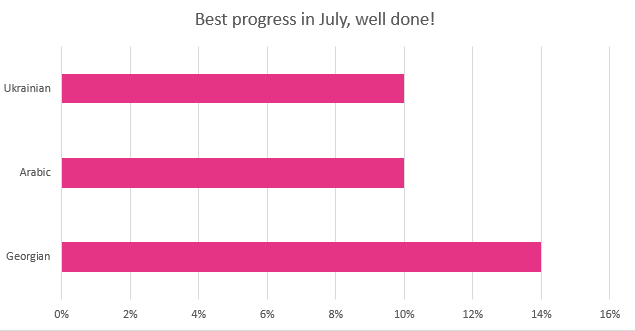 We’ve imported some translations from external contributions. Georgian has now translations for the front-office kindly sent by Levan Beruchashvili. Thank you!

We also have new active languages: thanks to translators who joined us to translate to Estonian, Azerbaïjani, Macedonian, Arabic. Welcome to the team!

As you probably know, a translated string will not be available in PrestaShop as long as it is not validated. For this reason, it’s important we should keep a good level of validated strings vs. translated strings, to make sure everyone benefits from the latest translations!

There’s been a lot of proofreading going on in July (+49% compare to June), it’s great! Unfortunately some languages are still a bit behind: 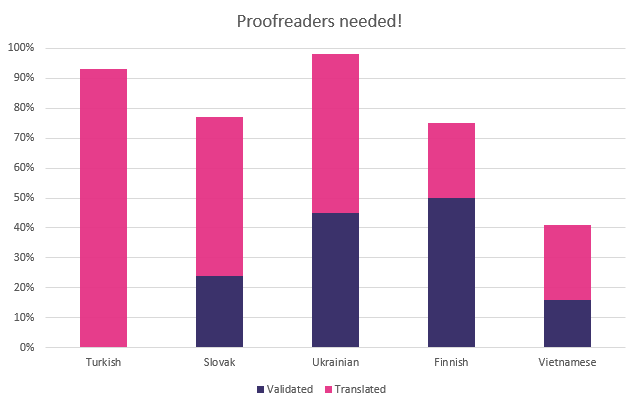 Turkish, Ukrainian and Hungarian have a high level of completion. We need your help so that these languages can be available to PrestaShop merchants! As long as it is not proofread, it won’t be available in PrestaShop. Let’s do something about it!

If you wish to contribute by proofreading what has been translated, please contact me on Crowdin with the language you’d like to proofread.

As you might have heard, we’re launching an Ambassadors program. Ambassadors have joined from several countries already and some of them are Crowdin members. So don’t hesitate to get in touch with them: harmonization, glossary, meeting other translators… whatever you want to do for your language / country, Ambassadors can help you to reach the community!

Here are the PrestaShop Ambassadors you can find on Crowdin:

You can see other ambassadors for your country there.

And if you wish to join the project to represent PrestaShop in your country, join the program!

If you want to gather your fellow translators to work towards a better harmonization (yes, we can), do let us know, we’ll include a word about it in the next monthly report.